The outside of your home may be a shining example of the Christmas season but there are ways to be energy efficient and still light up with Christmas fun. and in doing so we are fulfilling a historic mission, detailed below.

A British householder who wires up his home with 45,000 festive lights and decorations is doing his bit for the planet by only using low-energy bulbs. David Grant, 49, has spent 20 years and “tens of thousands of pounds” turning his house into a giant Christmas “wonderland”.

But he doesn’t like to burn too much energy, so he chooses power-saving LED lights. David, of Blantyre, Lanarkshire, said: “People say our meter must cut bacon because it runs so fast, but it doesn’t.
“We hardly use any energy at all. Technically, my display is green.”

In fact, being energy efficient is one of the easiest ways to bring costs down during Christmas. Most people might be surprised to learn that standard Christmas displays use very little power. For instance, a string of 400 fairy lights uses less power than a standard light bulb and adds less than $2.50 to your bill, if run for 10 hours a night for all of December. Keep in mind that LED and fibre optic lights use less electricity than standard ones. 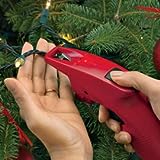 you are away from home. Turning off other lights and appliances at the wall if you’re heading away from home for the holidays will also save you money and reduce your greenhouse gas emissions. “If you’re away for a while and want some peace of mind, consider installing motion sensors or timers to keep running costs down.” Standby power from appliances like televisions, sound systems, games consoles, computers, printers, modems and even dishwashers, can add more than $100 a year to household electricity bills, so if it is on, turn it off.

The counterweighed candleholder, designed to keep a candle upright so it doesn’t burn the tree, is copyrighted. American families who decked their trees with lighted candles typically kept buckets filled with sand or water nearby — just in case the flickering flames lighted the branches. They also used “Christmas rugs” — precursors to the tree skirts of today — to keep wax off hardwood floors. \

GE introduces the first light set for public sale. The cost: $12, or about the weekly wage of the typical American worker at the time. With constant inflation, the price would have reached $80 in 2009 — leaving little in the holiday coffers for a new iPhone. \

After years of producing a carbon-filament bulb (c), GE introduces a more-efficient Mazda bulb with a tungsten filament (d). Tungsten produces a brighter light, one considered more consistent from bulb to bulb. Mazda, meanwhile, is traced to Ahura Mazda, a god of light in Persian mythology. \

The Society for Electrical Development, a trade organization, finances the first lighted Christmas tree at the White House. The tree is displayed publicly at the Ellipse, the park south of the mansion. At the foot of the 48-foot balsam fir, President Coolidge pressed a button that ignited the 2,500 bulbs in red, white and green. \

About 15 manufacturers form a trade union called the National Outfit Manufacturers Association and, a year later, begin selling Christmas lights. The merger reduces the number of businesses selling decorative lights but greatly enhances the variety sold. Sets were commonly peddled in strands of eight, 16, 24 or 32 lights — compared with strands of 100 today. \

GE sells bell-shaped lights for the first time. The new shapes reflect a trend in the holiday-light industry, which introduces “unusual” designs to spur lackluster sales during the Great Depression.

NOMA introduces bubble lights, featuring glass tubes filled with methylene chloride. When the tubes are lighted, bubbles form at the base, then float to the top. Methylene chloride is used these days primarily as a solvent in paint remover.

Miniature lights, or “fairy lights,” are introduced. The smaller bulbs grew in popularity as the decade progressed and, like other technologies that have shrunk to dimensions once unimaginable, are considered “regular-sized” today.

Light sales take a dive because of the increasing popularity of the Evergleam, an early artificial tree made of aluminum. Alas, electric lights hung on the highly conductive aluminum branches offered a recipe for a fiery disaster; instead, the tree was typically “lighted” with a rotating color wheel placed near the base. Not for almost a decade did the faux tree go out of style.

The federal government requests that families not hang outdoor lights (and limit indoor displays). The reason: the Arab oil embargo and resulting energy crisis. Setting an example for the populace, President Nixon orders the lights darkened on the national Christmas tree. \

The icicle-light craze reaches its zenith, with many stores nationwide reporting sellouts — including retailers in central Ohio, according to a Nov. 28 article in The Dispatch. The lights are designed to resemble icicles from rooftop gutters.

The type of lights known as LED (short for “light-emitting diode”) becomes all the rage for people dreaming of a green Christmas. Though not new — the first practical LED light was invented by scientist Nick Holonyak Jr. in 1962 — the energy-saving technology is considered more accessible. LED lights use 100 times less power than traditional bulbs and last up to 100,000 hours.

One Response to “Lo-energy xmas”