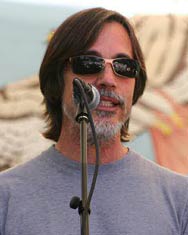 In his new eco-TV series Ed Begley has just outed singer songwriter Jackson Browne as a long-time off-gridder. Browne, who used to go out with Daryl Hannah, is living on an off-grid ranch in deep Southern California.

“He’s got this big wind turbine, and his ranch is completely off the [power] grid,” Begley said. “He’s done all of it himself.” We’re impressed. But Browne is so cool and unassuming that no further details seem to exist

Browne founded Musicians United for Safe Energy (MUSE) along with Bonnie Raitt back in the 1970s. They put on the very first Live Aid in 1979, though they did not call it that. The all-star series of concerts organized by Bonnie Raitt, Graham Nash, John Hall and Jackson in 1979 to benefit MUSE. In addition to serving on the MUSE Foundation Board, Jackson helped edit and compile the 1980 3-LP live album from those shows. No Nukes/The MUSE Concerts for a Non-Nuclear Future featured a line-up including Bruce Springsteen, The Doobie Brothers, Carly Simon, James Taylor, Ry Cooder, Chaka Khan, Peter Tosh, and Tom Petty, among many others. The album, which includes Jackson