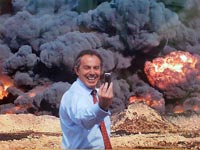 This year�s World Economic Forum is planning a major project to bring off-grid electricity to rural poor in Africa and elsewhere. Canadian BC Energy is heading the initiative which will announce a pilot project during the January 23-27 event in Davos, Switzerland.

Davos is dominated by businessmen, and some women, looking for networking opportunities with politicians and each other. But they also do a few good works and this is undeniably one of them.

The Energy Poverty Action (EPA) group is focusing efforts on providing electricity to rural, off-grid communities, where the primary energy needs are for lighting, cooking and industrial uses such as water pumping or milling. A mix of energy sources including biomass (wood), kerosene, human or animal waste currently provide this energy.

The EPA was initiated by a group of eight energy CEOs during the 2005 Annual Meeting of the World Economic Forum in Davos. The objective is to contribute to the United Nations’ Millennium Development Goals (MDGs) by developing a scheme for the provision of access to electricity to villages that are not yet connected to the grid. It will look first to biofuels . The continent could produce highly efficient biomass products both to fuel its own economy, as well as to supply energy hungry industrialised countries.

An alliance of companies banding together such diverse groups as the food giant Unilever, sportswear manufacturer Nike and delivery firm TNT, will be presenting a text which claims Africa, like India and Mexico between the 1960s and 1980s, will finally be able to bring about its own agricultural revolution by tapping into biotechnology, modern agronomic knowledge and techniques and new markets, such as biofuels.

The majority of African farmers at present have no access to even the most basic farm inputs, infrastructures, technologies and science.

With rising agricultural commodity prices and the rapidly growing global demand for bioenergy, this could soon change. According to projections by scientists writing for the IEA’s Bioenergy Task 40, Africa by itself can produce more than 350 Exajoules of exportable bioenergy by 2050, in an explicitly sustainable manner. That is: without deforestation and after meeting all food, fiber, fodder and forest product needs of growing populations. 350 Exajoules is almost twice as much energy as that contained in all petroleum currently consumed by the world.

This enormous technical potential will only be actualised with good planning, policy assistance, tech transfers and indeed, with the tools of the Green Revolution.

The recent example of Malawi’s super harvests shows how by simply subsidizing a small amount of fertilizers, Malawi made two record maize harvests in a row, turning the country from a begging bowl dependent on food aid, into a major grain exporter supplying even the World Food Program. This most simple of interventions can be replicated across the continent.

In short, the idea that Africa is set to experience its own Green Revolution is not far fetched. Biofuels can help a great way in speeding up the process, because one of the key ingredients of the revolution is smooth, mechanised production and efficient supply chains. This requires abundant and cheap energy, in a liquid form. This is needed to drive water pumps, irrigation tools, harvesters, tractors, processing machines, and so on. There’s no sense in an African farming community producing an excess of grains, when it can’t transport them to markets or export them. Tens of recent examples of harvests being ruined because of physical oil scarcity in developing countries show that without liquid fuels both the production and distribution of farm products are threatenend. The role of oil products in agriculture is thus not to be underestimated. Biofuels can prevent high oil prices from ruining the opportunity:

But biofuels, and biomass in general, can play another role in Africa’s development. Biomass produced in Sub-Saharan Africa enjoys many comparative advantages: plenty of land, suitable agro-climatic conditions, labor in urgent need of employment. The crops grown there, such as sugarcane (for liquid biofuels) or eucalyptus (for solid biofuels), are more efficient compared to fuels grown in more temperate climates. If the wealthy West were to import bioenergy, instead of subsidizing its own inefficient producers, African countries woul be certain of a new market that would bring in the funds needed to finance the Green Revolution.

But care should be taken to ensure that African countries do not once again become mere exporters of raw materials. They should invest in processing biomass into finished products – liquid fuels, pellets, biomaterials, bioplastics and so on – to add value.

Oil key
The World Economic Forum will of course also address the key issue of energy security and the geopolitics of oil. Last month it published a report in conjunction with various financial institutions including Citigroup, Marsh & McLennan and Swiss Re, and it was pretty unequivocal: there is no reason for energy prices to fall any time soon. On the contrary, the report sees prices rising. And that is just going to be another pressure on the global economy.

High oil prices hit developing economies particularly hard, especially because they are energy intensive and because the product is so all pervasive, needed in all sectors of economic life (hence its demand inelasticity). Oil importing developing countries, representing more than 2 billion people, feel each increase in oil prices immediately in all productive segments of society. Abundant and cheap energy is key to development. Scarce and expensive energy is detrimental to progress. The correlation is one of the best established relationships in development economics. The generic ‘human development index’ strictly correlates with the ‘energy development index’.

Energy poverty
Poor access to energy entrenches poverty, constrains the delivery of social services, limits opportunities for women and erodes environmental sustainability at the local, national and global levels. Worldwide, nearly 2.4 billion people use traditional biomass fuels for cooking and heating, and nearly 1.6 billion do not have access to network electricity. Sub-Saharan Africa has the lowest electrification rate in the world with three out of four people without access to electrical energy (IEA, World Energy Outlook 2002).

EPA is managed and facilitated by global companies in partnership with national governments and international financial institutions. The initiating companies, British Columbia Hydro (Canada), Eskom (South Africa) and Vattenfall (Sweden) signed an Alliance Agreement to facilitate the implementation of projects in Lesotho and the Democratic Republic of Congo (DRC). The EPA Board, comprising the Alliance Partners, provides strategic advisory services and technical know-how for the design, supervision and construction of projects.

The governments of Lesotho and the DRC ensure national ownership of the projects and their integration in the national development programmes, and facilitate financing and project implementation.

The World Economic Forum has undertaken the Energy Poverty Action initiative in the context of its Industry Partnership programme for the Energy sector. The Forum facilitates dialogue between its member companies, national governments, intergovernmental organizations and representatives of civil society, and supports EPA Alliance Partners in achieving their objectives. The longer-term objective is to establish a formal link with a development institution that is mandated and equipped to grow and sustain the Energy Poverty Action initiative.

The Energy Poverty Action Management Unit (EPAMU), launched during the World Economic Forum on Africa in June 2007, is a centre of excellence that employs world-class skills and expertise from some of the most sophisticated and committed energy companies in the world to facilitate access to energy for deprived communities by delivering technical, operational, commercial and financial management.

By developing sustainable, replicable models to address the challenges of energy poverty, EPAMU uses the expertise of the EPA partner companies to ensure the capture and sharing of lessons learned.

The delivery of energy access is facilitated by creating a marketplace for energy supply, to overcome energy poverty, and by delivering business expertise and best practices. EPAMU brings together key energy players in partnerships between leading companies, country governments, local entrepreneurs and communities, national and international finance institutions and donors.

Local autonomy, balanced with planning and guidance by national governments and leading development agencies, is the core principle of the EPA approach. Local user associations are formed and empowered to manage, maintain and operate the electrification systems.