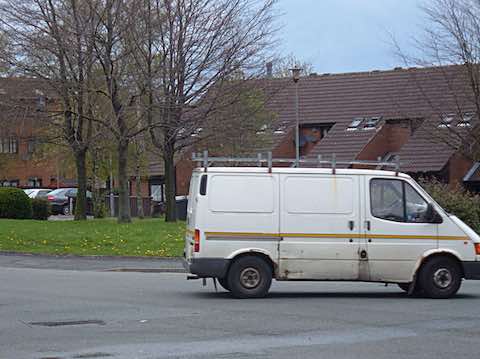 Fuelled by a desire to break free from mortgages, rent and commuting;  searching for the simple life, in beaches and beauty spots  a largely invisible, group are houseless but not homeless. Adam Butterworth, 26, an aeronautical design consultant, and volunteer at the RNLI, decided to live in a van after falling foul of an unscrupulous landlord. He explained: “I was spending £900 a month, nearly half my wages, to rent a one room studio flat that was filled with damp and causing me respiratory problems.

“A van is the most attractive alternative to haemorrhaging money on negligent landlords that couldn’t care less.

Yet financial freedom came at cost: the cold. Despite installing a log burner, wall insulation and getting creative with duvets, he said that low night-time temperatures, especially during winter, were “challenging.”

Without electricity or the internet, the van had taught him to enjoy the simpler things in life. He described how of a summer’s evening he would park facing the South Downs and admire the view with a bottle of locally produced craft beer.

“Where we live, we are blessed with places to go,” he said.

Henry Shanks, another long-term van resident based in Henfield, echoed this when he said that one of the best things about van life was the “constant stimulation from new places. “When you have had enough of that spot, you can just pack up and move along.

“It avoids any kind of stagnation of life.”

Being a musician, the mobility of a van was “ideal” for his career. Clad in lineage oak, it had running water, a kitchen, solar panels, gas, charging batteries and even a piano.

While people were “generally friendly”, there “wasn’t much space to park [and the] infrastructure is not great, recreation spots do not have facilities, like taps, toilets and rubbish bins.”

In January 2021, the Home Office implemented new ‘anti-trespass’ legislation that can land those camping on private land with hefty fines of up to £2,500 and jail terms.

Growing tired of living with her parents, 25-year-old Laura Bates from Steyning was planning on buying a van to “pay her own way.”

While studying a master’s and working part-time at an engineering firm in Storrington, she explained that “financial reasons” had influenced this decision.

“Trying to rent, save for a mortgage and have any sort of life is pretty much impossible.”

A van was also seen as offering the chance to “declutter” and “simplify” her life.

She said: “we have so much stuff, [that] you really don’t need. I am looking forward to cutting back and having the bare minimum.

“When I get anxious, I think a lot about material things. I want to change that: looking at the outward stuff, as opposed to the inner stuff.”

However, as a single woman, there were safety concerns. Alongside more conventional measures such as double locks, she intended to hang men’s boxers on her washing line and put old boots at the entrance of the vehicle, “so that people think I am not alone.

“But it is quite safe, you’ve just got to get over the first couple of weeks.”

And overcoming these difficulties was viewed positively. Van life would “build practical skills and self-reliance, things women are not encouraged to do,” she said.

When her dad needed help, she wanted him to “ask me, not my brothers. “There’s a lot of stigma out there.”

All those interviewed by the WSCT complained about negative stereotypes and the public’s lack of understanding.

“People don’t like difference, they don’t like stuff they don’t understand or that scares them. They just revolt against it, when they don’t really know about it.

“Life for under-30s is hard, it would be nice if there was less stigma. Society associates living in a van with not having a job or being poor. When actually it is just a different way of living.”