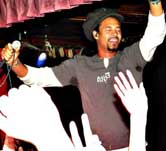 Michael Franti & Spearhead, is topping the bill tonight at the final day of the 9th Taos Solar Music Fest. Get down there if you are in the area. Franti blends hip hop with a variety of other styles including funk, reggae, jazz, folk, and rock. He is also an outspoken supporter for a wide spectrum of peace and social justice issues.

The other big names at the three day event were Big Head Todd and the Monsters, and Los Lobos.

“It’s a beautiful place to play,” Franti told Off-Grid. “and its testimony to what solar power can do.”

The Monsters, who have recorded in their “off-the-grid” studio high in the Colorado mountains, topped the bill on the opening night. The band performed a set of new songs just completed for the release of a new album