Stealth camping in the city 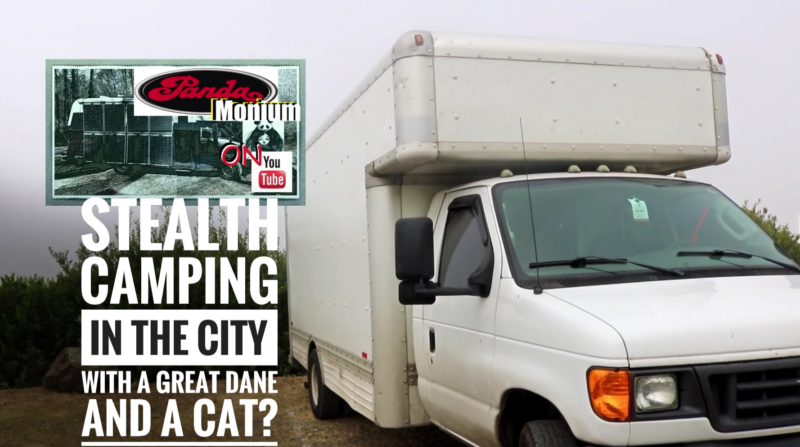 Most of the people I know of who live in their vans or other vehicles are travelers, they camp, they don’t tend to live in the city, not so for Jay, he lives in a retired U-Haul truck with his cat and a great dane! Yes, I said a great dane, as large as those tend to be, it’s apparently not too big for this conversion.

I like how Jay did his conversion, he kept everything very simple, which kept the weight as well as the cost at a minimum. Though the weight was much less of a factor since he used a commercial moving van as the base, it’s meant to carry a lot more weight than standard build vehicles.

I have always thought that U-Haul moving trucks would make a great camper van, they have plenty of power, they have lots of space, the kind of space you can use to create your own personalized living space. The other nice thing about the U-Haul (commercial style) trucks are they are inconspicuous, you will not draw much attention, especially if it’s painted white, it will blend in with any other commercial vehicle in the city.

Jay does in fact use his van as a delivery vehicle, so he is actually driving it around town, he left a space between the back roll up door and the inner wall/door so that he can place the items he delivers without showing that he is actually living inside his vehicle, and when he’s not using it in town, ie in a safer place, he can leave the roll up door open and use that space as a porch.

I was a bit surprised to find that Jay needs 2 air conditioners to keep the box cool, mainly for his animals, but only during the hottest part of summer, I wonder if he could add any more insulation, especially to the roof area, that might help keep the box from overheating and help keep in the cool air.

Watch and enjoy, let me know if this is something you would like to do, I’d be curious to know how you would implement this.