Should I live on a boat? 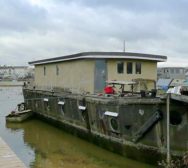 WHATis it really like living on a canal boat or on the river? So many of us have wondered if it would be a way of avoiding a huge rent bill and staying closer to nature, while holding down a job in the city. The one pictured is a concrete-hulled structure near Shoreham. There is a busy chat going on in The Guardian newspaper.

Here are some of the comments:

buddysparadigm 2h ago
The most important thing that I can’t stress enough: you absolutely have to WANT to live on the water. Secondly, read today’s article on decluttering, boats DON’T have a lot of space, especially narrowboats. Thirdly, be prepared to live frugally, by that i mean not necessarily financially but possession wise. There will be times when money or more importantly, time and in some cases, actual ability to get to where you need to be to get what you need will be severly hampered or in some cases, actually curtailed, eg the floods of 2012/3 winter. Trailing along a very muddy footpath dragging a 20 litre container of water – or worse, poo – can be soul destroying and even if you have a holding tank it needs to be emptied periodically and if you’re stuck somewhere, better have a Porta-potti on standby. Cooking with gas? Oh you will be 99% of the time, got a spare cylinder, is it freezing, hmm, might not give any gas and no, you CANNOT keep it in the warm, it just becomes a waiting fuel air gas bomb.
Okay, the upsides…..see previous comments. I’m in the process of refitting my 24ft 40 year old boat to allow me to spend the occasional period on board and I’m having to draft in help to do this, luckily he’s my brother so cheaper than a professional. This is just for the odd trip, if I had to live onboard full time I’d be looking at a LOT more expense. Finally, did I mention that you have to really, really want to live on the water. Look carefully, DON’T buy from a well known marina up north (W******s) who make a nice living selling overpriced rust buckets to people with a dream of living the boating life as they make their way down to an idyllic life on London’s waterways, all white painted panelling and 3 bits of “artful” furniture, see canalworld forums for unhappy tales of disaster. This missive is not here to put you off, just to prepare you not to be done over by tales of the river bank. Good luck whatever you do.

carolineford 6h ago
My son lived on a boat for a while but boat life wasn’t for him. He missed home comforts – a flushing loo, a shower (he joined a gym), a decent kitchen. He had a boat on a mooring so had to row across to it and back with loads of shopping, washing, drunk – he fell in once or twice. He is now in a house and much happier. Having said that there were days when the boat was idyllic. Woodburner going in winter. Lovely walks and plenty of wildlife. Also he had friends on other boats so they all helped each other out. It was a lovely community. But unless you have a lovely boat and a good mooring it is really glorified camping. Suits some: not others. Think carefully.

Gertrude23 6h ago
“Isn’t it cold in the winter?” That’s a running joke in the boating community; always one of the first questions we are asked. The truth is the opposite. If you’re aboard full time the fire doesn’t go out for months at a time; you’re in an insulated box with a big heater. Walk the towpaths in the winter and you see a lot of open doors and windows.

I tended to do a day onboard and a day at my partner’s but I’d get home, light the fire and decamp to the pub. 2 pints and it was toasty when I got home.

There was once a post that asked what people miss about living in bricks and “having a poo and never having to think about it again” was my favourite comment. Filling and emptying various tanks becomes a major driver. It takes a lot of personal resource to manage a life afloat but the rewards are worth it.

No personal experience but a few of my friends have done it. Both eventually quit. Whilst it did sound like there were fun moments neither properly estimated the hassle factor, particularly in London where moorings are in high demand.

It’s also a lot more expensive than you’d think. I’d say: it can be a great idea so long as living on the water is your actual goal. If your intention is just to have a flat without the expense I think you’ll find it tougher.

Bristol_Fashion 8h ago
I lived on a narrowboat off and on and can sum up the experience by reminding anyone who’s canal-curious that you are up close to your carbon footprint. Nearly everything you take for granted living in a ‘normal’ household, you will have to carry to – and from – your boat. If you’re up for it, organised & fit, you can (the government-controled canal trust allowing… ) have a great time, depending very much on the boat and its moorings you decide on.
Get it wrong and you will regret it, so my advice is to do a lot of research before you take the plunge, as it were. In particular, go & talk to as many boat dwellers you can find, on the reach you are interested in. You may be in for a shock when you learn of the true complexity and cost.

1903DB 8h ago
In 2010, After 6 months research we decided a Dutch barge was the boat for us (2adults,2kids). Searching online (apolloduck website) we saw there is more choice of less rusty better equipped boats accross the channel. A Vintage DB 20mx4m, just big enough to live on, small enough to fit in a UK marina. We lived on it for almost 5 years and learnt alot about all aspects of life aboard which can be rewarding and sometimes tough too: Unfortunately an engine failure, bad weather & tides going the wrong way, created a different type of adventure than we had expected, Google ‘barge rescue’ (https://youtu.be/-kg_QweiLy0) that’s me being rescued in 40mph gale and washing machine seas..

I’ve lived aboard for 8 years. I’ve loved it, for the reasons many people have said – the freedom, the privacy (more than you’d think) the water and surroundings. I live on the sea, so it’s a bit different. As a note of caution though, my partner and I moved on board because we really wanted to, and it’s still been hard at times. Sometimes the bilge pumps don’t come on in a storm at 2 in the morning and you’ll be up to your elbows in stinking water trying to fix it. Sometimes you won’t get any sleep because of the weather. These things are part of boat life as well, which is fine if you enjoy the good times and know it’s what you want, but I’ve seen quite a few people come and go who felt like it would be a cheaper alternative and a way to escape renting, and unfortunately it often doesn’t work out for them. There are a lot of hidden costs with boats. It may not be that much cheaper. I think you have to want to do it for its own sake, at least a bit, and it’ll be an adventure and you’ll enjoy it – but if it’s pure desperation to escape the rental market (totally understandable) think very carefully before you commit as it may just be another financial hole to climb out of.

It’s brilliant fun, affordable and fascinating being on the water. However, it really does make you appreciate little luxuries such as running water (you will have to fill a tank once a week or so), a thermostat (most boats are heated by a coal or wood burner) and a flush & forget toilet (again, weekly pump outs or emptying). You get used to having less stuff too: a real bonus.

I did it for 4 years in West London and I’m so glad I did – nothing beats coffee on the water first thing in the morning – but now I’m a bit older and have a family, I love the comforts of a house.

One Response to “Should I live on a boat?”