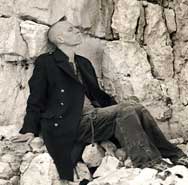 Want nothing – Be happy I didn’t start my off-grid life because I felt guilty about hurting the planet, I started it because I felt I was connected to a system that wasn’t nourishing me, and disconnected from an eco-system that was a real source of nourishment – physical, mental and spiritual.

In October 2005 I had a terrible headache. It turned out I had suffered a near-fatal brain haemorrhage. I was rushed to surgery, where they drilled a hole in my skull and attached a metal clip to the wall of an artery  which had burst in my brain.

Before I consented to the surgery, I was told that this was a technically complicated operation and there was a good chance that, if I didn’t die on the operating table, I would have some kind of disability. There was also a significant chance of post-op complications over the following 21 days, during which I might also die.

Thankfully, the surgery was successful. As you can imagine, the days that followed were a time of focused reflection on what was most important to me in life.

A few years before, a friend of mine had moved to the mountains in Spain and was living in a yurt there. When he first told me he was going to do this, I thought he was insane. But the year before my haemorrhage I had been to see him. It turned out that he wasn’t insane after all.  And I needed to do things differently from now on.

So while I was recovering, over a period of several months, I began to make a yurt.

For those of you who don’t know, yurts were developed by Mongolian nomads. They are semi-permanent, low-impact structures made of wood and covered with canvas, a bit like a tipi.

The poles for my yurt are mostly ash, with a little hazel, from a coppice wood in Derbyshire.  The tarpaulins were bought second hand from a marquee hire company. I bought a wood-burning stove on the internet and drove it all down to the mountains.

Three years on I have been back and forth from the mountains a few times. This was partly for economic reasons (ran out of money) and partly because I was offered a recording contract while I was living in the yurt. My first album (Here) came out in 2007.  Many of the songs on it were written in the yurt.

I’ve now moved onto my own piece of land and have spent the last few months living here.  In order to keep a foot in the door of society, and with a bit of luck contribute to changing it, I have been keeping a weekly blog of my time here.

The blog has caught the attention of the media. After an interview on Radio 2, I was contacted by a woman who lives in a yurt in Alaska. Her story made the -10 it can go down to here feel pretty warm!

My heating comes from the dead trees on the land.  As I say, it can go down to -10 in winter, but with enough clothes, duvets and wood, all is well, even when there are only a couple of pieces of canvas between me and the elements.

My water comes from a spring. Originally I had to walk down to a spring by the river everyday, but a local friend discovered a puddle on the land here that turned out to be a spring. So now I use that.

My electricity comes from a solar panel. I knew nothing about solar set-ups before getting here, but the internet is an incredible resource and I have successfully researched, bought (from Barcelona – in a foreign language!) and installed a panel, battery, charge controller and inverter.

It is wonderful to see the source of your water, and to know that your electricity is being magically created from sunbeams, rather than burnt out of fossil fuels. And I enjoy my relationship with the trees, to carry my heating home, to smell the olive wood when it has been freshly chopped.

At night there is no light pollution. The stars are incredible. The silence is magnificent. I feel lucky and free. In the daytime I am surrounded by mountain views. There is so much variety in the landscape, and it changes almost moment to moment. The light shifts and everything is transformed. The mountains in the distance are snowcapped and glistening. You can see why many people in this world think that deities live in such places.

I watch the journey of the sun through the sky, and then I watch the moon rise too. When the moon is full, it’s like the gods have left the lights on. You don’t need a torch. The mountains are bathed in a silver glow that takes your breath away. Literally. I just stand there sometimes unable to take my eyes off it all.

This may seem rare and special, but actually it’s everyone’s birthright. You are supposed to feel like this about your environment. And when you feel like this, why would you want to damage it?

Our species is hitting the planet so hard because we have lost touch with its majesty. We have surrounded ourselves with ugliness and created a void in our hearts. Naturally, we try to fill that void, but we fill it with things that cause more damage. This is not a good cycle to be caught up in.

I don’t worry about the planet – the planet will be fine. Give it a few thousand years and it will come around. A few thousand years is nothing to a planet. It is humans that need to take stock. Not only are we threatening our own existence, we are not really enjoying ourselves in the process!

We are a part of this magnificent universe, and we deserve to dwell happily within it while we are here. We just need to learn to look for that happiness in the places where it actually lives.

Padma’s blog is at www.padmamusic.blogspot.com.

9 Responses to “Secrets of happiness”