Guest writer Keith Farnish takes up the cudgels to support the word “Green” in an ongoing debate over whether the word is now so over-used its meaningless. 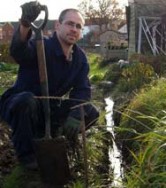 Farnish: Green not Brown I don’t believe for a moment that the corporate world will let go of the word “green” without a fight, and I certainly have some sympathy with Nick in turning to our old friend “brown” – good old earthy brown, compost brown, manure brown, bark brown – but while brown is a colour you are far more likely to find in a woodland than in a shopping mall, it is not the only colour of life.

In fact life has a host of different colours: the vivid reds that signify the fruits of autumn and the segment of sun as it disappears over the horizon; the warm oranges of so many flowers, pebbles and leaves; the wide blue of the sky and its reflected light in the oceans; the white of the brightest cloud and the firmest mushroom; but most of all the green of leaves, of algae, of plankton – the green that means photosynthesis, that means oxygen, that means life.

Green is the reason we are here.

No corporation is ever going to take that away from us – it can try, but I’m claiming it back from the bastards who haven’t just stolen “green” for their own nefarious purposes, but are stealing the entire language from our lungs.

So many words have been redefined for the purposes of Industrial Civilization: the market now defines “growth” as something entirely economic, the very opposite of the fundamental growth that signifies every living organism. Economic growth spells death for ecologies across the globe. “Progress” is a tool of politicians, a yardstick by which any move towards true sustainability is measured in negative units, but by which concrete plains and glass towers tremble at the very tip of political goodness. “Animal” is no kingdom in the eyes of the media: it speaks of savage brutality; it signifies the most basic, most heartless, most inhuman of behaviour; it disconnects us from our roots. The football hooligan, the rapist, the paedophile – all now “animals”, because we fear the primal, we fear what we are.

So many words being eaten whole by the system that threatens to tip us into oblivion.

They want it all, but it’s our green, it’s our life, and they’re never taking that away from us.

Keith Farnish is a writer, philosopher and father of two, who wants to learn how to live with nature. His first book “Time’s Up!” will be published in March 2009, but you can read it for free at www.amatterofscale.com because he’s nice like that. Oh, and he really enjoys pissing off corporations who pretend to be “green” at www.unsuitablog.com.