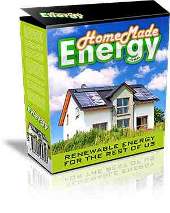 Box full of hot air Demand for microgeneration equipment is set to soar in response to massive increases in domestic energy bills, says a new report.  But there is a danger that consumers will be tricked into buying the wrong gear by internet scammers such as Earth4Energy.

UK household energy spending could rise four-fold to nearly £5,000 a year within a decade, making all forms of alternative energy generation far more attractive says the  study, by internet price comparison company USwitch,which has a vested interest in stories of energy price increases.

If world demand for energy continues to rise, the costs of domestic energy bills will spiral to £ £4,733 a year by 2020. Energy costs will be further boosted by investment in infrastructure, the costs of boosting energy efficiency and the costs of cutting carbon emissions.

“This will trigger a massive increase in demand for all types of alterative energy generation, independent of the national grid, including solar panels, wind turbines and ground and air-source heat pumps,” said author of the report, Ann Robinson, Director of Consumer Policy at uSwitch.com.

The forecast takes into account a significant investment programme shortly to be undertaken by the energy industry and Government. The investment, expected to total £233.5 billion, will guarantee the country’s long-term energy supply and enable the roll-out of smart metering into all homes, but will add £548 to the annual cost of fuel bills.

Energy prices have declined from their peak last year and recession is dampening demand for power but the report predicts that we have moved into an era of permanently high energy pricing.

Once the recession is over, demand for power will soar in India and China which will force global energy prices even higher. At the same time, North Sea oil will start to run out adding greater pressure on the market. The UK is particularly vulnerable to market fluctuations because of the country’s dependence on Eastern European gas, says the report.

“This is a wake-up call for us all,” warned Ms Robinson. “The £5,000 a year energy bill may seem like an outside possibility, but we have to remember that energy bills doubled in the last five years alone and that the huge investment needed just to keep the lights on in Britain will alone add £548 a year onto our bills. The fact is we are entering a new era of high cost energy and households will have to adapt their behaviour accordingly. “

She said that the increased spending “will change the economics of everything to do with power. It will make alternative sources and locally generated power far more attractive because pay-back periods will be far quicker.”

However she stressed the interdependency of on and off grid technology. “Devices such as solar panels depend for their payback on the ability to return power to the grid in order to defray their costs,” she said.

She also lambasted the UK energy industry for its opaque approach to pricing. Fewer than 5% of UK consumers are on the most competitive energy tariffs, so 95% of consumers are paying more than they need.

“Most people are paying far more than they have to for the energy they use. This has to change. My advice to consumers is to invest in making your home more energy efficient, reduce the amount of energy you use and make sure you are paying the lowest possible price for it.,” said Ms Robinson.

Big projects such as a new energy efficient boiler or home insulation can be expensive says the report, but the savings made through cutting household energy bills can be re-invested into energy efficiency measures to reap even greater rewards in the future.

“Don’t be put off,” said Ms Robinson. “If cost is an issue, speak to your supplier to see if they can help – they have a pot of money available to help households with energy efficiency. Or contact the Energy Saving Trust for advice. The key thing is to start future-proofing yourself against higher energy bills now.”

However some experts accuse USwitch of scaremongering.  “It is impossible to accurately predict wholesale prices over the next ten months, let alone the next ten years,” said Garry Felgate, Chief Executive of the Energy Retail Association. “The best way customers can keep energy costs down now and in the future, is by using less energy,” he added. ENDS