Living on a school bus 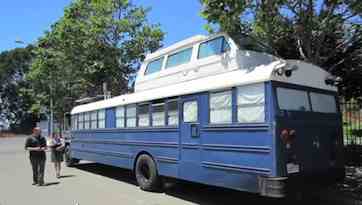 With a $12,000 budget, a San Fransisco couple decided to turn a 39-foot school bus into a dream home – that sleeps ten people.

To create their totally off-grid dwelling, Richard and Rachel, who run a blog, mounted six solar panels on the roof of the bus, installed a compost toilet, solar fridge and freezer and a propane-fed catalytic heater, stove and oven.

Rachel, who says they live rent-free, paying just $100 per month for maintenance, admitted that family and friends were ‘confused’ by their decision. ‘My mom’s reaction was “this isn’t the sixties.”

But as the duo explain on their blog, their dream was ‘to own our home, produce all of our necessities of living, and have the option to go where we wanted.’

So after buying a used school bus for $3000, the couple drafted autoCAD plans and began to design every detail of their new home.

This enabled them to start with a blank canvas, instead of buying a used RV or already-made mobile home, which they believe is flimsier than a steel-framed bus.

Their hand-made furniture is built to fit the specs of the bus, and much of it is duel purpose.

A seven-foot loft bed above the driver’s seat was built for guests, and next to it, they created a lounge area with two seats and a table that also converts into a full-sized bed – where Richard’s father sleeps when visiting.

The bus also boasts a movie room, located on the ‘second-story’, which was made out of a van’s shell and welded on top of the bus.

They also re-modeled IKEA pieces to fit their space, where a shoe cozy holds their trash and recycling bin, and rolling drawers that magnetically snap into place became their kitchen cupboard.

Richard explain that investing in a bus, instead of an RV, ‘would allow us to have a blank canvas in terms of designing the interior.

‘This would ensure our ability to maximize the space and functionality. The shell conformed to our lives versus us conforming to it,’ he said of their work-in-progress.

Solar panels power their lifestyle, which the couple, who build new parts of their home as they have the money, bought off eBay at $200 each.

They paid $1200 for the world’s first upright, front-loading, battery-free solar powered refrigerator and freezer from Sundanzer, which was made by a former leader of NASA’s Advanced Technology Refrigeration Project.

They recently replaced their emergency toilet with a composting toilet, and plumbing is next on their list – they currently wash dishes with vinegar and shower in other locations every two to three days.

Rachel said: ‘Really, what we’re paying for is the efficiency of the items that we have. We want to live high-tech, but we want to live with the lowest amount of energy possible.’

Until the home is plumbing equip, the bus will stay registered as an automobile, rather than as an RV – an important status distinction.

‘The reason this is important is that RVs get home owners rights, which is helpful for taxes and credit. Also the police cannot search your vehicle without a warrant when it has RV status,’ Richard explained.

Their investment, while slow-moving, is already paying off in the cost of living, they say.

The couple pay just $100 per month in utilities and to maintain the bus, which enables them the freedom to live as they please – spending time with family and friends – rather than working full-time.

2 Responses to “Living on a school bus”