Living here vs there 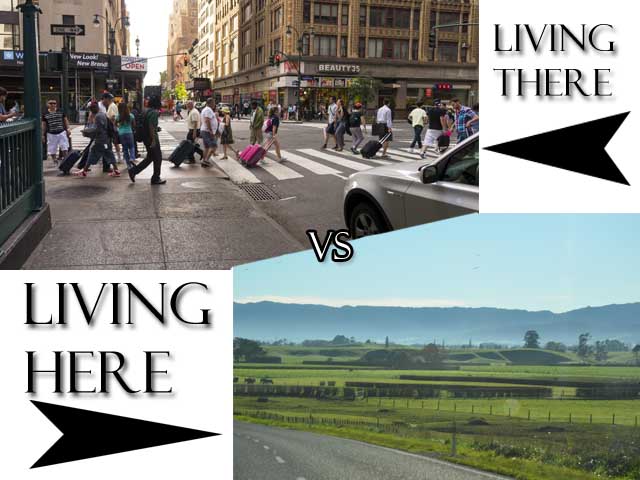 When we left the big city, well more like the outskirts of the big city, we lived in a trailer park on the edge of Irving Texas, it felt more rural because right across the street was lots of industrial and empty land, but even so, this was in the middle of what we called the metroplex of Dallas and Fort Worth. We had all the usual utilities, electric, water, sewer, gas, phone, cable, trash pickup and the such. There were grocery stores and other major shopping within a very short mile or so driving distance. We had neighbors, lots of them very close by, there was no getting away from people.

Living in this plethora of people, we had very few friends, really just one or two to speak of and they didn’t live nearby. We honestly didn’t know our next door neighbors, oh we were on nodding terms with them, we would recognize them if we saw them at the gas station, but we weren’t very close with any of them, we never visited them nor them us.

It didn’t take long to discover that this wasn’t going to be the way we would live, moving into a tiny (but spread out) community, everyone knows what everyone else is doing, word gets out fast that there are new people around and the community quickly jumps in to meet you and make you feel welcome. One of the things that we have learned living so far away from any major town and so far away from other people is the safety net that is available in the bigger cities just isn’t here in smaller communities, so it’s up to the people to look out for each other and help each other as much as possible.

We have more friends since moving away from people than we have ever had before, and I like it! We have a network of people out here who will jump in and help each other when there is a need, such as a vehicle breaking down, if you are stopped on the side of the road, all you need do is wait a bit for the next car (or truck) to come along and you will get a ride. If you need work done but don’t have a lot of money to pay, then people will donate or barter their time and skills.

Of course, along with all that familiarity comes some drawbacks, I mentioned that living in a small community, everyone and I do mean EVERYONE knows what everyone else is doing, sometimes that can become a problem, especially if there is a tendency for gossip. I have learned that a good line of communication is the key to slowing the gossip train, nothing will eliminate it, but being a bit proactive to get in front of it, and not getting upset by it when it happens to you goes a long way to getting along in a small community.

It’s really easy to think that just because you don’t see many (or any) other homes in your line of site from your property, that doesn’t mean that there aren’t “eyes” out there, think you can put in a septic system without anyone knowing? Think you can build something without anyone else knowing? Think again, there will be someone who sees the materials coming in, there will be someone who knows the person at the check out lane of the hardware store where you made your larger purchase. Once one person knows about it, it doesn’t take long to get around the neighborhood… it’s just part of living in a small community. You lose your anonymity when there are fewer people around to notice what you are up to, which is opposite of what you think should happen. When you are in a larger city with lots of people and lots of eyes, they tend to ignore what is going on around them, it probably doesn’t affect them so they just don’t care to know what you are doing, you are just another face in a sea of faces.

Yesterday, we had a cookout with a few friends over, something that is common for us to do on Friday evening, it was very much a spur of the moment thing this time, but a few phone calls and text messages later and we had a small crowd of friends gathered around a grill full of hot dogs, sausages, corn on the cob and other goodies. One of our long time friends said that he knew of a new lady who had moved in up the road, it was decided that he would go get her and bring her to the gathering. We had already met her once out on the road, so it wasn’t like an abduction (LOL), she grabbed her banjo and came down. We had the best time getting to know our new neighbor, chatting with old friends, listening to good music and eating tasty food.

This is something we rarely did back in the city, we would have annual get togethers with family once or twice a year, but never weekly gatherings of friends, especially not at our place. I really love my life and feel blessed each and everyday.

For the record, I’m not negatively judging living in the city, I know there are those who love living in busy bustling places, then there are those like me who enjoy a slower pace. To each their own. Tell me which you prefer?