0
The price of the off-grid dream just went up.

In the wake of Covid, climate change and the stream of urban dwellers moving to the country, a tubmbledown shed, a houseboat and the land that connects them, have gone on the market for £500,000 with a bidding war expected. Its hardly surprising when tech workers on six figure salaries are told they can work from anywhere in the world. They move to places with a good 4G signal (which this property does not have) and then a few years later will be surprised when their job is exported to India.

It has its own water supply and power system and is completely off-grid, the product of years of hard work by current owner Roland Mann. He has spent years fitting out the boat, in order to sell it and move to Norway with his family.

The 90 years old barge with a two-bed shed, on the banks of the River Deben, was built between the wars. 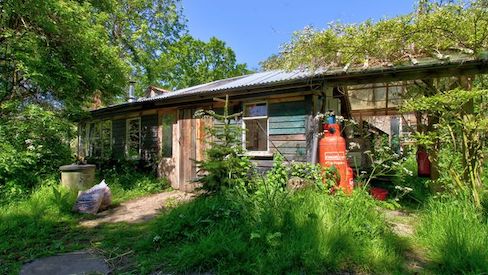 “We’ve spent lots of time learning different skills, we’ve designed and built our own power system, our own water purification plant, so we’re totally off-grid for everything, except the telephone of course,” Mr Mann explained. He wants to get a smallholding in Norway where is wife is from originally

He credits his wife as the “genius behind the land”, adding: “She’s got a real flair for design, she’s absolutely packed the garden out with an incredible diversity of plants.”

“One of the things people say when they come onto the land is ‘wow, this feels great’. It has a really amazing feel to it, it’s hard to describe.

“One of the things we’ve continuously felt is that we were sort of caretakers, that this wasn’t truly our home.

The property is being advertised by Yopa, realtors.