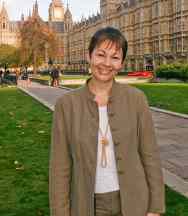 The UK Green Party manifesto for the upcoming general election explicitly attacks the idea of centralised power and  promises to take from the rich and give to the poor.

Speaking before the launch of the manifesto, Green Party leader Caroline Lucas (pictured) promised a “signifcant increase in decentralised energy.” Arguing against the inefficiencies of the grid she said, “many centralised power station waste as much of two thirds of their energy in heat through their cooling towers and in distribution losses.”

The party promised to cut emissions from power generation to zero by 2030 and obtain half of Britain’s energy from renewable resources by 2020. But at the same time it rejected the idea of nuclear power as a stop-gap, saying (wrongly) “nuclear is a centralised system of generation when we should be pressing ahead with micro generation and local distribution networks.”

Unfashionably, the party also rejects a free-market approach to solving the problem of global warming. “The private sector has not responded to the challenge of renewable energy with sufficient vigour and investment,” it argues.

So they say they will increase the tax take as a share of national income by 25 per cent in just four years. This would come from large hikes in income tax, capital gains tax, corporation tax, financial transaction tax and a permanent tax on bankers’ bonuses. The Greens would also increase taxes on motoring, flying, cigarettes and alcohol.

They are promising to invest £20bn over the course of one Parliament in a large-scale programme of wind power and other renewables, and create 80,000 jobs in manufacturing and installing the equipment.

Most radically, it proposed “carbon quotas” for every citizen. Once you have exceeded your free carbon allowance you will have to buy more units if you want to carry on consuming.

But a spokesman said that Green policy rejects the idea total reliance on off-grid power. Yes it wants to introduce stronger planning regulations in support of on shore wind, tidal, solar and geothermal energy schemes. But it also supports the idea of Europe-wide renewable energy initiatives such as an under-sea grid for offshore wind and marine power.

“There is no panacea for environmental problems. We need a range of radical policies to achieve our aim,” he said. “Yes many people want decentralised power. But many others don’t want it or can’t have it. What about those in social housing or the need for energy in social provision such as transport?”