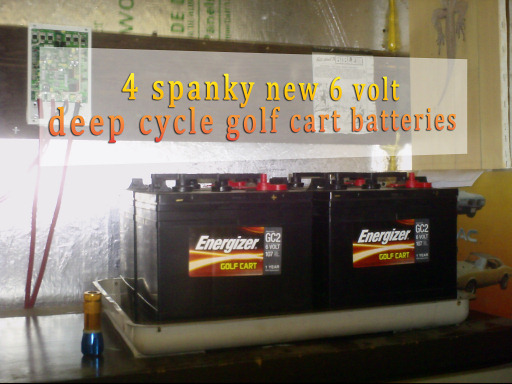 Today was the first full day on the new batteries, we had everything hooked up to them, including the new chest freezer to refrigerator conversion, about a month (or so) ago our old one smoked on us, fortunately it happened during the day and I was there to catch it, it might not have gone any further, but as far as I’m concerned, when you see smoke, fire usually comes next. I’ll do another writeup on the new fridge very soon, until then you can read about how I DIY’d the conversion here and here.

I am hard on my batteries, I have always known that, and as a result my batteries have had to be changed out more often than they should. This time, knowing I was going to be putting out the $$$s to buy a new set, I wanted to do it right, instead of buying a couple of batteries, using them for a while and buying more batteries later and trying to add them to the older batteries, I decided it would be best to go ahead and buy the number I needed and going with those. I also decided I was going to invest in some true deep cycle golf cart type batteries.

After much research, on line and asking lots of questions of those with more experience with this sort of thing, I settled on Energizer CG2 golf cart batteries, I purchased them from Sam’s Club. These are 6 volt each, I run a 12 volt system, so I needed to buy them in pairs to hook together to make a 12 volt system per pair. I purchased 4 of them. They run about 220 amp hours each, that’s one of the things I had to research, it’s not listed anywhere which was a pain, I eventually found out the information I needed. As of this date, the price around $85.00 each (plus tax and a $15.00 core charge if you don’t bring in another battery).

Last week, I went to Odessa, it’s a 3 hour drive (one way), my friend had a Dr’s appointment there so we both went together. I did make one mistake, when you buy batteries like this, they charge a core charge unless you bring another similar battery to turn in. PB told me he had 3 batteries on property and one on another property up the road we could have. That morning before I left, I had gotten a phone call from the company I work for, they needed me to come in that day to do my time sheet (otherwise it’s a month before I get paid again), I had counted on being able to come in the following day (Friday), but turns out that was Good Friday and they would be closed so I had to do it that day, before we left.

So I went from having plenty of time to having no time to mess around, PB showed me the back of the truck with the batteries he’d placed back there, I knew he hadn’t been to that other property to get the 4th battery, so as far as I knew, I only had 3 batteries to turn in, I paid little attention as PB showed me how he had the batteries sitting in the back of the truck to keep them safe as I drove across the state. It wasn’t until after I got home and told PB about buying the batteries that he told me there were 4 batteries to turn in, he had located another one on our property, I never heard him because I was concerned about the extra stop I had to make on our way out…. oh well, it was a $15 mistake that can’t be undone now. 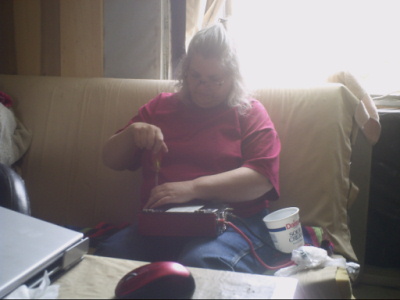 Friday we hauled the 4 batteries up the hill, got them inside the sky castle and set up. Before that, I took the inverter apart to clean it and inspect it, it had been going into fault mode on the old batteries, I didn’t know for sure if it was because of the batteries or if the inverter was going bad. It was quite full of dust and in need of a good cleaning, I also oiled the fan. Everything in it looked good to my eyes.

We hooked everything together, by the time it was all set up, it was late in the day, there was not enough time to get much of a charge, I also wanted to allow the system to run with little or nothing on it with the inverter hooked up to make sure the inverter was working property, I was not willing to hook up the new freezer-fridge conversion yet. I plugged in a small lamp with a LED light so that if the inverter shut off I would be able to see it happen without damaging anything else.

Everything worked fine that evening, I eventually hooked up my laptop and associated goodies, using it much of the night, everything worked just fine. The next day, we hooked up the freezer-fridge conversion and waited. It ran for maybe 15-20 minutes then shut off, it was working like it’s supposed to work. Yesterday was mostly overcast so we didn’t get much of a charge from the sun, fortunately the batteries come charged from the store.

Today, Easter Sunday, with sunny skies, and everything hooked up, about halfway through the day we got a full charge, I was so relieved to see that the solar panels we currently have were enough to fully charge the batteries, even while we were using the power.