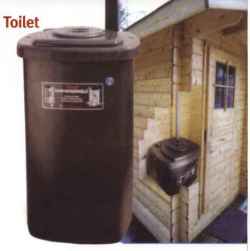 Canada is taking to the composting toilet with a speed umatched in any other advanced industrial nation.

Although Toronto Mayor David Miller told a conference of Great Lakes mayors they should ban conventional toilets and switch to low-flow models, others go much forther. Shane Jolley, provincial Green Party candidate in Bruce-Grey-Owen Sound, goes further. He says it’s time for technology that might allow builders to take toilets in new subdivisions off the grid altogether – no-flow composting models instead of the low-flow ones Mayor Miller suggests.

“People have an aversion to dealing with our own waste,” Jolley says, “but this type of toilet uses far less water and makes far fewer demands on our resources. There’s work to be done educating people about how compost toilets work and the benefits, but there should be financial incentives and effort made to implement this concept.”

For generations, we’ve spent vaults of money to purify and pump water to our homes. Then we foul it and pump the results to sewage plants, to spend more making it clean enough – we hope – to dump into our lakes and rivers. The biolan pictured here collects the waste in an easy-to-move container, which can then be swapped over once every few months and left to compost.

It’s a flush-and-forget cycle that’s costly to our municipalities and environment – and some environmentalists think we can break it, with composting toilets. The technology, which has been around since the 1930s, can also provide nutrients to help resuscitate spent farm fields.

The composting toilet’s mechanics are simple: the waste, via gravity, goes into a tank where, mixed with wood chips, it composts. The result is fertilizer, though the process requires time and a ventilation system – basically a fan – for odours.

In parts of the planet where drinking water is in short supply, the main selling point of composting toilets will likely be the huge amount of H2O that can be saved. But will builders in Canada find it worthwhile to take the human waste-disposal process off-grid?

“We pay up to $8,000 per house in levies for sewage,” says Craig Marshall of Marshall Homes. “If we could save half of this money and save water too, the public might be prepared to go along with it.

“There’s a way to go in terms of public acceptance. Now, the first thing people want when they have, say, a cottage, is a flush toilet. A toilet that doesn’t flush and use water isn’t an easy sell.”

Other builders don’t sound so receptive. Mason Homes was named the 2007 Building Industry and Land Development Association’s low-rise green builder of the year in the GTA, but it won’t offer off-grid toilets as an option any time soon.

“There has not been a need for us to introduce this because we can work with the sanitary sewage systems,” company vice-president Sean Mason says. “I think we would face customer reluctance.”

Andrew Pride, a vice-president at Minto Energy Management (a division of Minto Developments Inc.) says his company does not have an interest in compost toilets right now, partly because many of its projects are highrises.

“The idea of consumers taking the compost down 30 floors doesn’t seem realistic,” he says. “We are looking at ways that rainwater could be used for toilets, rather than compost-oriented solutions.”

“I’ve heard it said that the flush toilet is the worst thing ever devised by modern man,” he says. “We install expensive piping to transport water into porcelain receptacles and then we instantly turn the water into a vile liquid capable of giving us diseases like cholera.

“The compost toilet, through the miracles of chemistry, eventually transforms the matter into useful fertilizer,” says Griffith, who calls himself a permaculturist, someone who practises self-sustaining agriculture. “Wood chips provide carbon to hasten the decomposition process. I’d love to see this system used in subdivisions.”

While that may not happen soon in Southern Ontario, the compost toilet is part of the Toronto and Region Conservation Authority’s newest building – the Restoration Services Centre in Vaughan.

“The compost toilets are part of that commitment. The building has washroom facilities for 45 people, with all seats connected by drop shoots to a mechanical unit in the basement with two composters.

“Using technology such as the compost toilet is a matter of changing people’s perceptions. The idea of it can give people the creeps.”

Santiago Kunzle of Montgomery Sisam Architects, who designed the building, says that with a client committed to sustainability and a site 400 metres from city services, compost toilets were an easy sell.

“There was no resistance to the idea,” he says. “This technology allows us to dramatically reduce water usage – by six times the norm. Here in Ontario, we are blessed with water we can see in all directions, so it is easy to get the idea that water is unlimited.”

“There are many species of composting toilets that can be used anywhere,” he says. “Only highrises pose a technical challenge.”

Optimistic words? The compost toilet has been used in various applications, often where nature and ecology are top priorities. In Vancouver, there’s the C.K. Choi Building, part of the University of British Columbia’s Institute for Asian Research. In Sweden, there’s the Dano project, a series of campsites. The Trans Canada Trail in Moncton, N.B., has a series of compost toilets.

But what about homes?

“Most compost toilets are used by people who know about the technology and make it their business to look for them,” says Don Mills of Clivus Multrum, a Massachusetts-based manufacturer of compost toilets.

“Builders might have trouble selling the concept to the average person off the street, but the sewer system is a toxic waste repository. The compost toilet captures the nutrients that we know how to capture and stabilizes everything.

“Compare this to the sewage treatment system, where we disrupt our ecosystems.”

“In the past few years, thinking has changed around food,” Allen notes. “People realized the importance of eating food produced locally, for example. I think as food shortages develop because of the poor conditions of fields – fields that are actually dead – we may see acceptance of concepts like the compost toilet, which has the potential to be part of the solution.”

Builder Marshall is investigating the idea. “I’m going to ask my people to look into putting one in at one of our sites,” he says. “That should give us an idea if the public is open to using them.”

Mason sees a possible future for the compost toilet … some day. “Green initiatives are increasingly important,” he says. “Someone will use this technology, eventually.”