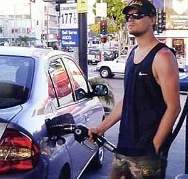 Why do we care that Leonardo di Caprio drives a Prius?  What is it about humans (especially men) that makes us want to flaunt our compassionate side in public?

Like any other social animal, humans compete for status, he says, because high status brings privileges. We do this with conspicuous “handicap” displays which, like the peacock’s tail, are personally costly and so only affordable to high-quality individuals. These displays can take the form of “competitive altruism” – showy generosity such as public charity campaigns where rich people advertise their wealth by competing to be the biggest donor.

Van Vugt and his researchers found  that people become more generous when their donations are made public and that generous people get more status than their stingier counterparts (Personality and Social Psychology Bulletin , vol 32, p 1402) Men – though not women – are more generous when a person of the opposite sex is present (Evolutionary Psychology , vol 6, p 386)

All this helps explain why celebrity endorsements can benefit the environment. People look to celebrities and other high-profile figures for clues about what costly displays gain the most status. So by associating themselves with green causes and products celebrities can influence the domains in which individuals compete for status. Take the Toyota Prius. It is expensive – so not everyone can afford it – and green, so driving it is altruistic because it benefits others. And the fact that Leonardo DiCaprio owns one makes it a highly desirable status symbol.

But it doesn’t explain why Daryl Hannah lives off-grid

One Response to “Eco giving”