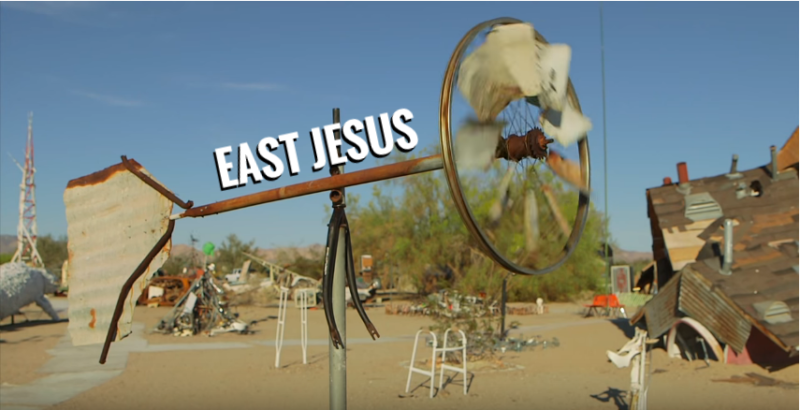 I think most everyone is familiar with “Slab City”, an abandoned military base in the Sonoran desert in California. This desolate place is a favored home of snowbirds living in campers and RVs during the winter. The summer temps can reach 120F but there are still year round residents.

East Jesus is an experimental, sustainable and habitable art installation located in the Slab City area. There is no religious connotation in the name East Jesus – it is a colloquialism for a place in the middle of nowhere beyond the edge of service availability; the off-grid facility operates with no municipal utilities. In early 2007, Charlie Russell left his job in the technology industry, packed all his belongings into a shipping container and sent it to a trash-strewn field where he began to surround his two art cars with sculptures that would become the foundation works of East Jesus. The Chasterus Foundation, a 501(c)3 non-profit formed after his death in 2011, has since guided the curation and expansion of East Jesus.
“East Jesus” sculpture garden entry

Made from discarded material that has been reused, recycled or repurposed, East Jesus encourages visitors to imagine a world without waste, in which every action is opportunity for self-expression. Assemblage and mixed-media art cover nearly every inch of it, interior and exterior. Sculptures and installations are constantly in development throughout campus, and the musical performance space holds a public address system, a stage lighting system, and a studio grand piano. There are also a solar power system with a battery bank made up of expired batteries disposed by telecom companies. Photography, multimedia art, performance art, writing and music are integral parts of a larger fabric, which their artists collectively are continually weaving. East Jesus artwork is living, growing and ever-changing, and embraces the thousands of varied voices from contributing artists who have added to the installation. Each day, residential staff gives dozens of free tours, and hosts visiting artists and overnight guests.

Have you been to Slab City? If so, what did you think of it?