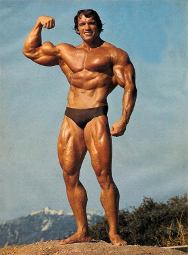 No Impact Man Governor Arnold Schwarzenegger has used a peculiar executive order to impose the most demanding alternative energy standards in the US on Californian utility companies.
The decree which was signed on Tuesday requires electricity companies to generate a third of their power from renewable sources by 2020. It sets California ahead of even Hawaii in the move to renewable energy. The island state has laws requiring that 40% of its energy is generated from renewables, but it has given its utilities until 2030 to comply –a full decade longer than California.
Schwarzenegger said the order was designed to reduce California’s dependence on fossil fuels and help clean its air while creating a reliable power supply for the 38 million people who live in the state.

“I am taking action today to make sure California remains a pioneer in clean energy and clean jobs… This order will provide clear, permanent direction for creation, delivery and servicing of California’s renewable energy projects, which will help avoid another energy crisis while achieving our renewable energy goals,” he said.
Executive orders issued by the governors of states are often regarded as an undemocratic way of sidestepping public debate because they are not laws passed in the state senate, but gubernatorial edicts.
It is little surprise that Executive order S-21-09 as the order is known on the statute books, has brought the Republican governor into conflict with California Democrats who recently passed an almost identical law. Their legislation would have allowed utilities to import renewable energy generated outside California as long as the power came from a plant that connects to California’s electricity grid.
The Governor said he would veto the Democratic bill because is protectionist and breaks federal laws against restraint of trade.
“Unfortunately, the bills the legislature recently passed are unnecessarily complex, would substantially increase costs on Californians and California’s businesses and, if passed, the state standard could be held up in legal battles because the bills violate the U.S. Constitution’s commerce clause by restricting the sale of energy across state lines,” he said.

Despite the wrangling California prides itself on taking a world-leading role in the fight against global warming. It has consistently refused to leave environmental issues to the market. Shwarzenegger’s administration has been characterised by an innovative and creative, if authoritarian approach to environmental regulation.
*In 2006, the Governor announced his Million Solar Roofs Plan to provide 3,000 megawatts of additional clean energy and reduce the output of greenhouse gases by three million tons. (Equivalent to taking one million cars off the road.) by providing incentives for homeowners and building owners who install solar electric systems.
*In 2007 the New Solar Homes Partnership was established to create a self-sustaining market for solar homes and gain builder commitment to install solar energy systems. Qualifying homes are at least 15 percent more efficient than the current building standards
*In 2007, Governor Schwarzenegger signed Executive Order S-01-07 that established the world’s first Low Carbon Fuel Standard. It aims to reduce carbon content in all vehicle fuels sold in California by at least 10 percent by 2020 and more thereafter.
*In September 2008, Gov. Schwarzenegger passed a package of significant environmental laws.
AB 1451 continued a property tax exclusion for projects that use solar panel energy and expanded it to include
builder-installed solar energy systems in new homes.
AB 2466 authorized local governments to receive utility bill credit for surplus renewable electricity generated at one site against the electricity consumption at other sites.