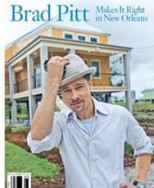 Him and Benjamin Button Outside of film and Angelina, architecture is a passion for Brad Pitt — especially sustainable architecture. Below find extracts from Brad’s interview with Larry King, 3rd December

After Hurricane Katrina, Pitt, 44, was so ashamed at how little help was coming from the Bush Administration that he brought together architects, residents and community leaders to draw up guidelines for rebuilding. Not only would the new homes be affordable, but they would also embody green technology, sustainable design — and most importantly — be adapted to survive the tumultuous weather of New Orleans.

With 150 homes on the drawing board to be completed, Architectural Digest Magazine made Pitt its cover story . “I couldn’t believe nothing was going on,” he told the mag of his first visit to the devastated Lower 9th Ward. “I recalled the pictures of people on roofs, begging for help and I couldn’t believe that this was our America.”

Pitt and his foundation are looking forward to bringing back the Lower 9th Ward — and using that model for other areas around the world. “We’ve cracked something here…these houses redefine affordable housing…this is a proving ground for a bigger idea that could work globally,” he told the magazine. “This project is not mine anymore. It’s so beyond me.”

And here’s what he told Larry King:

Pitt: Well, the goal is to create a template for intelligent building. The goal is to rebuild all of New Orleans, all the people who want to come back.

But, yes. Our initial goal is 150. And as you can see — you can see some homes behind me that now — that are — that have begun to spring up.

And this holiday there’ll be — there’s families that have already moved in and will be celebrating their Christmases here. So, we’re very excited.

We’re sitting in basically the same spot where you and I talked last year.

Pitt: And if we sit here again in a year from now, you’re going to see another 100 homes behind me. And we’re really happy.

And I thank you and your audience who supported Make It Right, because, you know, people that — families were having a very difficult time to come back. And through the contributions, we were able to help them meet that gap that they were falling short of.

And more than that, we, you know, we’ve built some homes here that are doing something really special. This home you see behind me now, the meter right now is currently running backwards. It’s a sunny day, so it’s — right now it’s off the grid. It’s making its own energy.

And the family there is going to save 75 percent off their energy bill throughout the year. They’re — they live in a place that’s comfortable, and with great light. And it’s a real — these homes are about dignity.

And that’s the thing I’m most proud of.

And as we look into the future, we ask ourselves, you know, how can we make this replicable? How can we standardize what we’ve learned here on the technological front?

The other thing I’d like to add is that the homes here are all LEED Platinum, which is the green certification. And that’s the highest standard you can get. And probably, a year from now, this will be the greenest neighborhood in the United States. I think so.

So, coming from a place that suffered such injustice, that’s been marginalized and almost forgotten in the sense of really helping people get back, has now become a place that is in the — that can be in the forefront of American communities. So, we’re excited on so many fronts.

You described the storm victims as being caught in limbo. How are they doing now? Is that hope still there?

Pitt: Well, the hope is definitely here. And it’s more exciting to be here now, because you see things like what’s happening in this neighborhood happening, you know, all over the city and even outside the city.

So, the money that was promised is starting to flow. There are multiple ground efforts, many different programs, people helping out, that are really starting to come to fruition. So, there’s a lot of great movement and a lot of great things happening down here. It’s really nice to see.

King: These are, of course, Brad, tough economic times. How is that affecting your ability to raise money?

You know, my hope is to take it much, much further than that, because I believe there’s a real template here to build upon.

But I don’t think we can keep asking the American people to help with this gap, or myself or other communities. I really think it’s got to come from the government at all levels. So, we’re trying to, now that the case of improving here, we are trying to see if we qualify for any of the money that’s been earmarked for this area to help with the rebuilding.

King: Do you think Obama will help?

Pitt: Man, I — he’s certainly not going to hurt. Yes, I think he’ll — I think he’ll help in — he’ll be helping this country in many, many different ways.

King: By the way, is New Orleans now your home?

Look for the full article in the January ‘09 issue of Architectural Digest. See Brad’s interview with