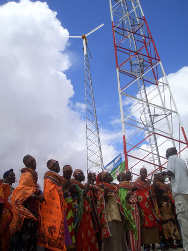 We can learn from them The mobile phone industry is big in off-grid power usage.  But not for any ecological reasons.  In fact a close look at the cell companies’ power consumption proves their talk of green is just that – talk.

The wireless network, due to the distribution of its infrastructure, is an ideal candidate to test out new ideas in decentralized power. But for the most part, cellular services  turn to alternative energy solutions where there is no access, or unreliable access, to grid power.   And they avoid building towers in isolated areas because its not cost-effective, although that is precisely where their consumers most need them.

Operators have cell sites in remote areas powered by geothermal and wind or diesel backup generators.  Places like national parks, which have no access to the energy grid, are most likely to receive the off-grid treatment.  Fuel cells are being deployed in hurricane-prone communities in the Southeast, where a reliable diesel supply is unlikely during a natural disaster.

But the green initiatives in the mobile industry appear not to embrace the power supply. Operators aren’t going to move their cell sites off the power grid — where it is available — anytime soon.

A direct connection to a centralized power source is still seen as the cheapest and most efficient means for an operator to power its network. The economic incentive simply isn’t there and neither is the pressure from environmental groups or agencies. Market research group Gartner estimates that the entire information and communications technology industry accounts for only 2% of global carbon emissions. The wireless industry contributes just a fraction to that total, and according to phone maker Ericsson the transportation of manufactured wireless equipment around the globe is responsible for a good deal of those emissions. A mobile network operator isn’t contributing an outsized share to the world’s global warming problems.

It does seem, though, that wireless is in an interesting position to become a global test case for sustainable industry. Vendors have driven power efficiency and alternative energy advancements far in recent years, primarily to meet the problems of deploying in the developing world. Those technologies now are leaking into the developed world.

The reason why most operators in the developing world are moving toward renewable power sources, away from generators, isn’t an overpowering sense of global responsibility. They’re being killed by the cost of diesel fuel. Energy costs in the U.S. will likely rise, just as the cost and operational difficulty of deploying green technologies will fall. Combine those with the operators growing environmental awareness and the possibility of government incentives and we may soon reaching a tipping point where the self-sustaining network makes more economic sense than a grid-powered one.

The monumental power needs of a Google data center can’t be met with an array of solar panels, but a single base station among a network of tens of thousands could. Going off the grid entirely might not be a near-term possibility, but becoming partially self-sustaining might. Solar panels mounted on every cell tower would be a start — it’s not as if they would make them any uglier.